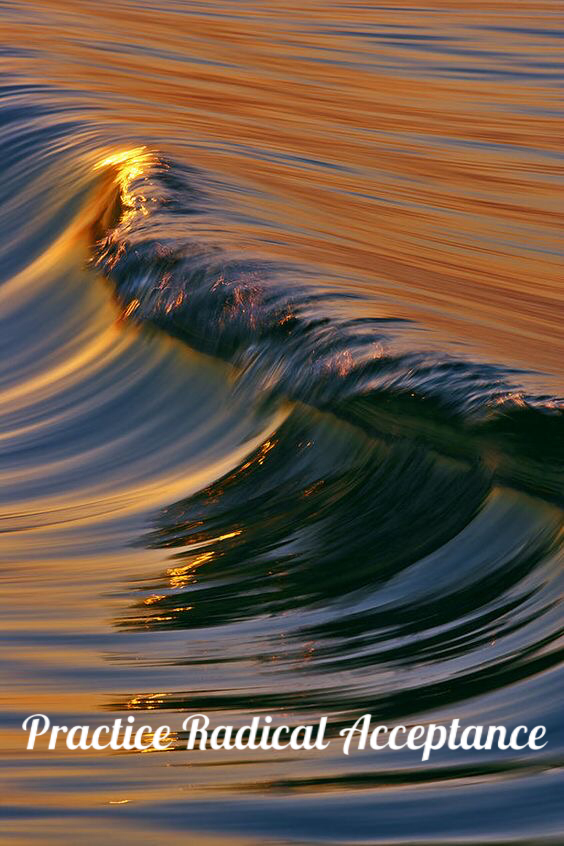 There are times in life when it’s difficult to accept reality.  It’s human nature to refuse to accept pain or close ourselves off to the aspects of reality we don’t like or want. Sometimes we secretly hope that if we refuse to accept things as they are, they will change.

From a Buddhist perspective, pain is inevitable in life. We will all experience the pain of disappointment, rejection, and failure, to name a few. However, it our refusal to accept pain that intensifies it and creates suffering, which is more prolonged and intense than pain. Think about it.  If you refused to accept the experiences of failure and rejection, you would need to avoid pursuing relationships and goals that are important to you. In your quest to avoid the pain of failure and rejection, you create suffering—feeling unfulfilled or alienated. If we practice the skill of radically accepting pain, we can decrease suffering. It’s true, we’ll still have pain, but pain is temporary. Nothing lasts forever.

So what is radical acceptance?

Radical acceptance is nonjudgmental acknowledgement of reality. In other words, “It is what it is.” But, radical acceptance is NOT approving or liking the current reality. It’s also NOT about resigning yourself to the status quo or giving up. In fact, radical acceptance doesn’t prevent change. It makes change possible. You can’t take steps to end a crisis situation until you radically accept you’re in one. Until you accept you have anxiety, you can’t use skills to cognitive-behavioral therapy skills to decrease it.

Another important point: We can’t radically accept the future because it hasn’t happened yet. Only the past and the present. So, radically accepting that there are not certain things in your life right now, like a job or a relationship, does not mean accepting you will never have them.  In fact, accepting that you don’t have them frees you up to pursue them.

What’s radical about it?

It’s called “radical” acceptance because it’s complete acceptance with the heart, mind and body. It’s not conditional—“I accept this provided it ends in 2 weeks.” It’s radical because it’s counter-intuitive—we’re accepting the very things we’d rather not.

How can I practice?

Radical acceptance is a skill that you can build up with practice. It may be easier to begin by practicing acceptance of smaller, less painful aspects of your current reality (NBA season suspended, gym closed) before jumping to the more challenging ones. It can be helpful to validate your preference that things were different as you accept, i.e., “I’d prefer my gym was open, but the facts are it’s not for now.”

Expect your mind to continually revert to non-acceptance and to fighting reality. Radical acceptance is not a one-shot deal. A short time after you’ve radically accepted you may find yourself thinking “It shouldn’t be,” “It doesn’t make sense.” When this happens, turn your mind to acceptance again and again. “I don’t like it, but I can accept it.”

You may find that practicing radical acceptance of painful realities decreases your suffering, and   enables you to respond flexibly to challenging situations in innovative and needed ways. To paraphrase  Jon Kabat Zinn, you can’t change the waves, but you can learn to surf.